Amateur golfers from around the country will join 80 celebrities and members of the Pro Football Writers Association for the event– conducted by the NFL– which annually draws the Who’s Who at Super Bowl for the benefit of the NFL’s Youth Education Town Project to be built in Jacksonville. 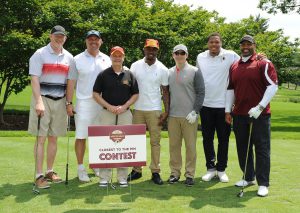 The format of the tournament is team scramble– pairing amateurs with current and former NFL players including members of the NFL Pro Football Hall of Fame.

A donation of $1500 to NFL Charities entitles each player to golf; a pairings party to be held at the Amelia Island Plantation Resort on Friday, February 4th from 5 to 7 p.m. as well as brunch prior to and awards party following the tournament on Saturday. Each participant will receive a gift bag of official NFL Super Bowl apparel.

The tournament will begin with a shotgun start at 10 a.m. on all three courses at the Plantation—site of many championships. Prizes will be awarded to the members of the first, second and third place teams on each course. In addition, each golfer will receive a special Super Bowl commemorative plaque bearing photographs taken that day of each team and each individual with his or her celebrity captain. The plaques will be presented at the awards party which will immediately follow play starting at approximately 3:00 and ending by 5 p.m. in the Amelia Island Plantation Pavilion.